How It All Started

Posted by authorssmith on May 8, 2012 in Garden, Seed Savers Series 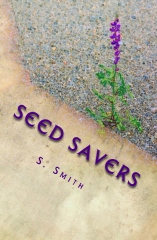 Some people have asked what inspired me to write Seed Savers; how it all came about.  I actually wrote the first draft of Seed Savers in about four months in 2010.  A couple of things inspired me.  First, I watched the movie, Food, Inc.  In the movie, there was a story about Moe Parr,  a seed cleaner, being sued by Monsanto. I was struck by a couple of things. One, I never knew that such a job, a seed cleaner, existed.  What else didn’t I know?  The other thing that really broke my heart was that this guy, this seed cleaner  from the heartland,would most likely lose his job.  In fact, I wondered if the occupation of seed cleaner would become non-existent.  I think from there, the idea for Seed Savers germinated  and took root, pardon the pun.

The other half of the inspiration, the part about why it is focused toward middle grade, is easy.  I was teaching middle school at the time.  And the kids I taught weren’t the biggest readers.  I thought maybe if I wrote them a book, they would read it; okay, or something like that.  🙂

← Plant A Seed For the Future
Fine Weather →