truth is deadlier than fiction 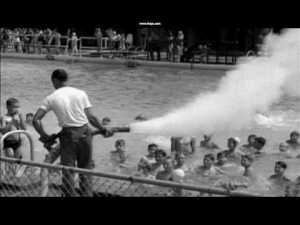 A few years ago, after watching Food, Inc.,  I was inspired to write a novel set in the not-so-distant future where seed ownership was outlawed and food choices limited. I was teaching middle school at the time, so wrote the book for that level with the main protagonists being age twelve.

Fast forward to today, a week after the release of book three in what has become a series. The political history I’ve unfolded in the books explaining how things got to where they are seems to mirror today’s headlines. I really don’t believe I’m an alarmist. I check my sources. I spend way too much time tracking them down, reading original documents, and cross-referencing. But sometimes the news really is that startling.

Let’s look at three recent or current events that I wrote as fiction in my books:

◆    GMO Labeling Initiatives defeated
Last year the people of California tried to pass a law that would require food containing genetically modified organisms to be labeled. Seems reasonable. The law was narrowly defeated at the last minute. Earlier this month the same thing happened in Washington state. What happened? The seed-owning corporations and Big Food business spent  $70 million on the “no” campaign.
◆The Food Safety Modernization Act (FSMA)
The Food Safety Modernization Act, while under the guise of protecting the food supply—and possibly that is the honest purpose (although with former Monsanto cronies at the helm, you really have to wonder)—will deal a powerful blow to small farmers if passed. Though it sounds like a good thing, the public is unaware of the way in which overreaching and restrictive regulations can cripple small farming operations. I understand the effects because I grew up on a small family farm. When you start dictating the contents of the very soil and water in which the plants are grown (as the FSMA does), an unreasonable burden is placed upon the farmer.

Don’t get me wrong, I’m not against our food being safe! The thing is, most of the contaminated food outbreaks have not come from the growing of our fruits and vegetables on small farms, not from the compost, water, or fertilizer. Most have come from somewhere along the production line or imported produce from other countries. (Worst Foodborne Illness Outbreaks In Recent US History)

Here’s something else to consider: Does the FDA really have the consumer’s best interest at heart when they don’t even require labeling of GM food? Bt corn seeds actually produce pesticides. You can believe that it isn’t harmful if you want to (after all, that’s what we are told, right?) But don’t forget the images of DDT being sprayed on children. Oh, and would it be impolite to mention the other things brought to us by Monsanto? (PCBs, Agent Orange, bovine growth hormone) Why is a slow poisoning of the population better than a sudden outbreak? Again, there are those who will argue the safety of GM food. But how will we know the effect on the population if the food is never labelled? So what if the percentage of food allergies in the United States has shot up in recent years (50% between 1997 and 2011, CDC)? Without a label it is untraceable. This may be the real reason the companies who own most of the world’s seed spend so much on the anti-labeling laws. Money and liability: the two biggest motivators of large corporations (not humanitarian efforts).

Before I get to my third point, let me say here that the public comment period on the FSMA has been extended until November 22nd—send your input now!

◆    Trans Pacific Partnership Trade agreement (TPP)
My final example of current events that remind me of my novel is the Trans Pacific Partnership Trade agreement. If you haven’t seen the Bill Moyers video on this, do it now! According to inside sources of this super secret deal, the TPP would restrict buying local, make states’ labeling of GMOs impermissible, and interfere with basic operations of the internet. Rather than being a trade agreement, Moyers’s guests call it a “government-granted monopoly”. More has come out about this just recently on Wikileaks. Go, find out about it.

In conclusion, I find it distressing that the fiction I wrote about in Seed Savers seems to be on its way all too soon. People, get out there and make a difference! It’s not too late.