Can children really change the future? It’s a tag line on the back of my first book, Treasure (Seed Savers, #1).

One criticism Treasure receives on occasion is that the child protagonists are “too smart” or do things too advanced for their ages. So today I’d like to introduce some real life child food activists. (I wrote Treasure back in 2010, so none of the characters were based on these children, but I am pleased every time I discover another child activist.)

First, there is Birke Baehr. Birke became interested in the quality of food when he was eight years old. When he was eleven he did a TED talk. Since then he has traveled and spoken in the U.S. and recently took a trip to Russia where he discussed the food system with children and attended an agricultural conference with organic farmers. In 2012 he wrote Birke on the Farm, a children’s book describing his journey to being the international youth advocate for sustainable food and agriculture that he is today.

And then there is the awesome Rachel Parent. Rachel is the founder of Kids Right to Know. When Rachel was twelve years old she had to do a speech in front of her school and chose the topic of GMOs. Rachel won a medal for that speech has continued raising awareness about the implications of genetically modified foods and works toward labeling GMOs. She was recently a guest on the Ed Show and in August of last year  took on Kevin O’Leary.

Rachel, by the way, is Canadian. Perhaps it was her influence that led to Canada being a free gardening country in the dystopian future presented in the Seed Savers series. 🙂 Watch Rachel in action here.

There are scores of child activists all over the world speaking out for important subjects close to their hearts whether it be organic farming, global climate change, or equality. There is a book out called Stand Up!: 75 Young Activists Who Rock the World and How You Can, To! if you want to learn about more child activists around the world. (I haven’t read it and I’m not associated with it in any way, but I thought I’d mention it.)

Although my Seed Savers books are fiction, there’s a lot of truth in them. Take a look. The first of the series is on sale this month for 99cents ebook at these fine vendors: Amazon, Smashwords, Nook, Kobo, Sony and iBooks. 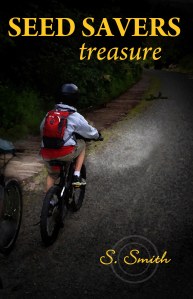 ← Charlie Brown’s 9 Tips for the New Year
When Would You Break the Law? →