Posted by authorssmith on February 16, 2014 in Seed Savers Series 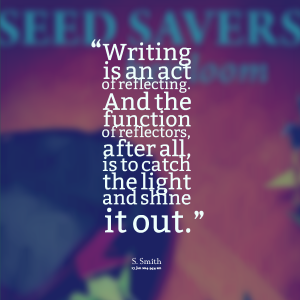 Just a quick note that Heirloom is featured on Ereader News Today in the bargain books section. Today is the last day that it will be 99cents instead of $3.99. Heirloom can also be borrowed from the Kindle Lending Library.

Jason might go all Edward Snowden on us. He’s ticked that the government put him in foster care and locked up his parents.

Arturo’s inconsistent English and penchant for mysteriously showing up might seem suspicious if he wasn’t so darn charming.

Lily, well Lily gets braver by the minute.

It’s late in the twenty-first century and large corporations have merged with U.S. government agencies to control the nation’s food supply. Not only is gardening and seed ownership illegal, but fresh food is unheard of by the masses who are fed the processed food groups of Vitees, Proteins, Carbos, Snacks, and Sweeties.

Thirteen-year-old Clare and her brother Dante have escaped to Canada where the old ways still exist. It is there that they make friends with the roguish Jason and learn the political history of their own country’s decline of freedoms.

Meanwhile, Lily, the friend who was left behind, begins her own journey to find the father she never met—a former leader in the ill-fated Seed Savers rebellion of fifteen years earlier. From Florida to the Smoky Mountains, Lily follows the signs in search of her father and is helped along the way by the quirky characters she meets. Not to mention the attractive Arturo who shows up midway to “protect” her.

Heirloom seamlessly weaves the gentle agrarian story of Clare and Dante together with the swiftly-paced adventure of Lily and Arturo. Themes of family, empowerment, and politics meet in this futuristic tale nostalgic for the past. Heirloom is a hopeful dystopia in today’s current sea of post-apocalyptic literature.