of the Seed Savers Series
8 Comments

The Religion of No Religion: Where Diversity Falls Short 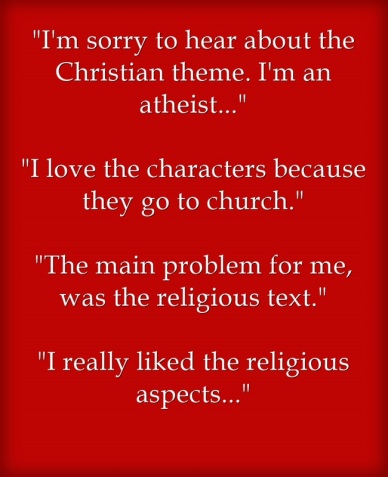 Recently, I noticed a conversation under a review of one of my books on its Amazon page. The initial commenter, after reading a long and thorough review of the book, left a comment saying they were sorry to hear there was a “Christian theme” in the book because he/she was an atheist and had wanted to recommend the book to another atheist based on their disagreement on Roundup-Ready seeds.

A second commenter chimed in with their two cents, noting that the main theme of the book had to do with misuse of power and greed, and pointing out that many children do grow up in families with some sort of religious belief.

Next, the writer of the original review added a couple of comments, clarifying that the book did not really have a religious theme, but to her the children’s prayers and one or two Bible quotes in the story seemed “out of place.”

The second commenter then came back and reiterated that though the book wasn’t perfect, they enjoyed that it showed the children as thinking individuals.

I have no idea if the initial commenter who dismissed the book offhand ever saw the other comments.  I was tempted to weigh in on the subject, but most people agree that it’s bad form for an author to respond to comments. However, I’m been contemplating a blog post on the subject of religion in books for a couple of years…

This is the way I see it: Treasure is about kids being empowered and making change.

This is the way I see it: Treasure is about kids being empowered and making change. Somewhat like the hobbit–smallest of all the fellowship–being the one to carry the ring. I wrote the story as a pantser, not a plotter, and the siblings turned out to be church-going kids, mainly I suppose, because this is where they first heard about the banned seeds: in a sermon about seeds (And symbolically, I suppose, using the church’s role as sanctuary). Also, because I’ve been around a lot of children, and they often have deep spiritual insights and questions. The elderly mentor uses the text in the Bible about food because it’s what she has in the oppressive world in which they live. The instruction is about horticulture, not Christianity.

The instruction is about horticulture, not Christianity.

The children pray because it is who they are and I didn’t feel right censoring it, although I did worry that some people would deem the book unfit for schools because of it. Which is sort of a sad irony based on all the other things found in books that could disturb children.

Trying to recall my internal debate on the issue, I believe a lot of it had to do with Harry Potter. When the first Harry Potter book came out, there was much hullabaloo in certain Christian circles that the books were full of witchcraft and bad for children. Many people dismissed the books without having read them. In Treasure, when the children say little prayers, I likened it to the spells in Harry Potter. When I included a Bible passage it was something poetic, like Shakespeare or the long songs and poems in Lord of the Rings. It was all from the Old Testament, so not exclusive to Christianity.

And what about the children who do go to church or synagogue and pray before meals or when they are afraid? Do they not deserve to see characters like themselves in literature?

And what about the children who do go to church or synagogue or pray before meals or when they are afraid? Do they not deserve to see characters like them in literature?

I guess I knew these elements might make some people dismiss the books, but I hoped that non-religious people would not do the same thing as the anti-Harry Potter camp and write the whole thing off. Sadly, there have been a few comments to that end.

Personally, my favorite books—Peace Like a River by Leif Enger and The Secret Life of Bees by Sue Monk Kidd—both have strong spiritual themes running through them. To leave out a spiritual dimension sometimes seems to me a gaping omission. My hope is that Seed Savers can be read and discussed by people with differing viewpoints, rather than avoided.

My hope is that Seed Savers can be read and discussed by people with differing viewpoints, rather than avoided.

If I were to chime in on the comments on Treasure’s page, I might make the simple suggestion that the atheist friend start with book 2, as the friend Lily has no religion. On the other hand, I’m not sure avoiding people who adhere to religion is a good option, considering they are our friends, neighbors, co-workers, and family. I would much rather we learn acceptance rather than avoidance.

8 comments on “The Religion of No Religion: Where Diversity Falls Short”