Posted by authorssmith on April 4, 2016 in Garden, poetry, Uncategorized

I’ve been feeling, lately, like it’s been too long since I’ve written poetry. Yes, I’ve been great about writing 500 words a day on a novel I’m working on…but I haven’t been writing poetry. And I miss it.

I also thought it was time I post another poem here on my blog. So I started looking through the ones I’d published here and there. None of them were right.

I decided to look through an old notebook where a lot of poems got started and not all of them got finished. I found the one that follows. It’s a rough draft without even a title. No date written, but it’s probably from 2011 or 2012 because that’s what is written by most of the others. It has to do with two of my favorite things: poems and gardens. 🙂

I could say the only thing that

grows in my garden is poems

but that wouldn’t be true.

Lettuce grows in my garden

so does kale, chard, tomatoes, and peas

Broccoli grows, but not well

Corn is given the chance every year,

The poems are in with the radishes

sprinkled among the herbs

lounging in the lawn chairs.

The poems tiptoe along with the cats

flap their wings with the chickens

buzz over my head with the hummingbirds;

the poems float in the backyard pool

and drift on the breeze

with the scent of strawberries,

The poems are still there

long after the vegetables are harvested.

You just have to look harder. 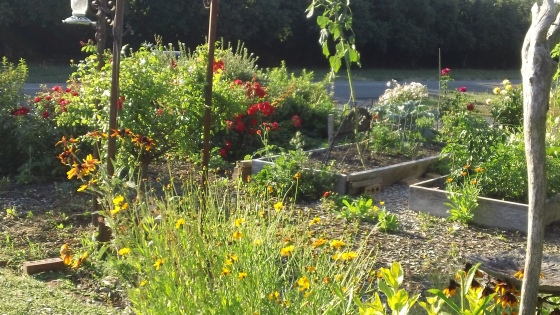