of the Seed Savers Series
7 Comments

In Praise of the Scarlet Runner Bean

Posted by authorssmith on September 25, 2016 in Garden, Rambling, Uncategorized 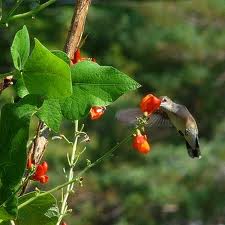 I wanted to write an ode to the Scarlet Runner Bean, but instead I’ll settle for an essay. For now, at least.

I planted the beans along the fence where my garden is. Scarlet Runners, are, as the name suggests, climbing beans. The running part did not disappoint me. The bean part did. They got large: wide and hairy. Maybe even stringy, I don’t remember. I was unimpressed. I vowed not to plant them again. 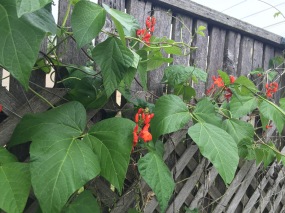 Oh you knave, Scarlet Runner. I didn’t plant them again, but they planted themselves. Those beans I gave up on last summer dried, fell, germinated, and came back this year.

I admit it. I have a soft spot in my heart for “volunteers” as my mom called the plants that come back on their own. I dug up those little volunteer Scarlet Runners and lined them up along the fence once more.

I also intentionally planted some other Scarlet Runners into a bean teepee in a garden at the community center I run. They do climb so well and bloom so beautifully red. 🙂 They did not disappoint. “What are those?” Everyone asked. “They’re so beautiful!” They were even mistaken for Nasturtiums last week (yes, they are still going, even toward the end of September). 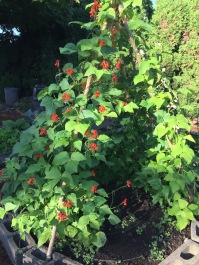 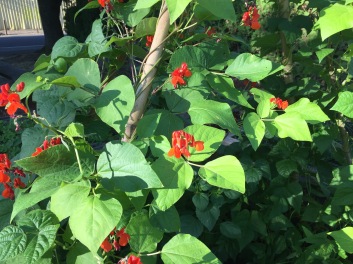 And then I became a true fan. Their persistence, beauty, and compliments had won me over.

I Googled Scarlet Runners and learned that the species is native to Central America, has also been called the Oregon Lima bean, and is grown only ornamentally in some places–a great attractor of butterflies and hummingbirds. Despite being grown only ornamentally by some, you can eat the flowers, the green beans, the beans inside fresh like limas (make sure to cook them!),the dried beans, and even the young leaves! The starchy roots are still eaten by Central American Indians, according to Wikipedia.

You can eat virtually every part of this plant AND IT’S BEAUTIFUL. And so are the seeds–cowabunga!

For more info on the Scarlet Runner Bean, check out this post at Eat the Weeds, and Other Things, Too .

Have you ever had a vegetable you thought you disliked, but then changed your mind about it? Let me know in the comments below. 🙂

7 comments on “In Praise of the Scarlet Runner Bean”