November 7 is a very special day at our house. It’s the day I gave birth to my daughter, Anastasia.

Often on or around this date I publish a new book. This is not one of those years. However, in honor of my daughter’s birthday I’m putting the first two books of Seed Savers on sale for 99 cents.

What’s the connection between Ana and Seed Savers? Those who have read the first two books know that Ana is the name of the wise and knowledgeable elderly woman who teaches the children about seeds and gardening in a future where such actions are illegal. It is a future where food is manufactured and distributed and has no resemblance to plant life.

When I  wrote Treasure (Seed Savers 1) back in 2010, Ana was very supportive. She was in high school and living at home. She loved the idea of the book before I ever wrote it down and her enthusiasm helped me put pen to paper.

What is the real Ana like? The real Ana plants and tends a garden all on her own. She loves good food and is an awesome cook. As a teen, she spent her summers working with children at camp. She was part of an award-winning Envirothon team in high school. She has sold apples at farmers market and harvested Marionberries on a night picking machine. Ana loves reading and devours books at an amazing speed. She is smart, stubborn, and opinionated.

Does this sound like elderly Ana of Seed Savers? Maybe so :).

If you haven’t read Seed Savers yet, now is a great opportunity to get the series (ebooks) at a discount! Four books of the five book series are currently available, and the first two  are only 99 cents for a limited time,  a savings of five dollars!! Available on Amazon, iBooks, Kobo, Smashwords, and Nook. 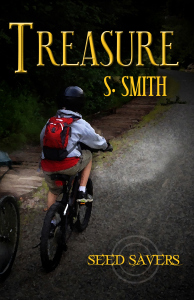