Posted by authorssmith on May 7, 2018 in Garden, Seed Savers Series, Uncategorized

Here it is, as promised, the new cover for rerelease of Seed Savers Treasure: 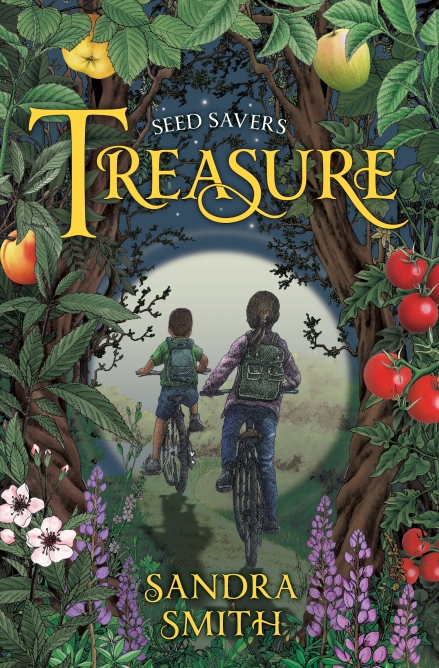 I think it’s gorgeous and conveys both the adventure and the garden theme. If you’re new to the Seed Savers series, here’s the scoop on book 1, Treasure:

It’s 2077. There’s no apocalypse, but some things are different. Things like the weather, the internet, and food. In twelve-year-old Clare’s world, blueberry is just a flavor and apples are found only in fairy tales.

Then one day Clare meets a woman who teaches her about seeds and real food. Ana tempts Clare with the notion that food exists other than the square, packaged food she has always known. With Ana’s guidance, Clare and her friends learn about seeds and gardening despite suspicions that such actions are illegal.

When the authorities discover the children’s forbidden tomato plant and arrest their mother, Clare and her brother flee. Clare has heard of a place called “The Garden State,” and with their bikes, a little money, and backpacks, the children begin a lonely cross-country journey that tests them both physically and spiritually. Will they succeed in their quest to find a place of food freedom? And can they, only children, help change the world?

Treasure will be available by the end of this month. I will keep you posted. Here is the schedule for the other books:

In the meantime, let me know what you think of the cover in the comments below. 🙂