Posted by authorssmith on August 21, 2018 in Seed Savers Series, Uncategorized

The cover for the new Seed Savers-Lily is here! The story of Lily takes place in August, so this cover reflects late summer and daytime rather than the night cover of Treasure, making it light and airy. I hope you like it. 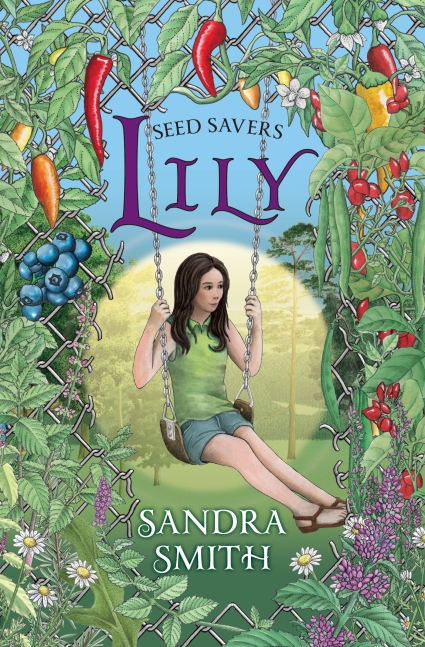 Lily’s release date is August 30 and will be available on preorder soon. 🙂 Here is the blurb:

It’s definitely not what she had in mind for summer vacation.

When her friends disappear under mysterious circumstances, thirteen-year-old Lily sets out to discover more about the secret organization with which they were involved. Her investigation unearths a disturbing secret from her own past, unsettling her world even more. In the meantime, Lily makes a new friend and falls for a mysterious young man even as she remains unsure whom she should trust. As her world crashes down around her, Lily struggles to decide what to do next.

Lily is volume two of the Seed Savers series but can easily be read out of order. It is is a suspenseful and reflective book with themes of self-empowerment, trust, acceptance of diversity, gardening, and politics.

and a few reviews:

“This series fills the void for younger-audience dystopians. Even so, older readers will love it too! I enjoyed Lily, and after that ending, I can say with confidence I will be reading the next one in the series.” –My Full Bookshelf Reviews

“With the arrival of Lily, I expected to get ‘the further adventures of Clare and Dante,’ but what I got was much more. Lily, a side character in the first book, Treasure, tries to continue the mission of saving seeds in her hometown after the disappearance of Clare and Dante. Rather than getting Treasure all over again, a common fault in sequels in general, Lily is a book all its own and full of secrets, secrets, and more secrets.”–Anakalian Whims

“Getting to know Lily and her story was a pleasant surprise. I found that I liked Lily a lot and want to know what she does next. I’m rooting for her to find what she is looking for! I’m also surprised to say that I liked the second book in the series even more than the first. I’m looking forward to reading book three to see where  Smith takes us next.”–Mrs. Nelson, middle school teacher