Posted by authorssmith on March 25, 2019 in Seed Savers Series

As most of you know, Flying Books House has been republishing and polishing the Seed Savers series.

I’m very pleased to announce that book 4, Keeper, is scheduled for release on April 16, in time for Earth Day! But I’m most pleased to show you the beautiful cover. This may be my favorite of them all. Once again, a big shout out to Shannon Bodie, cover designer, and Alan Baker, illustrator. 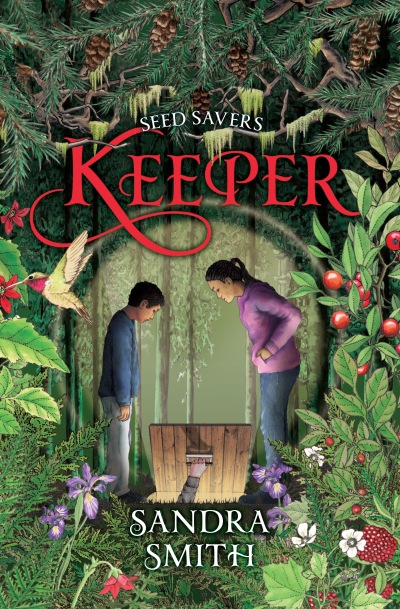 Beginning in a Pacific Islander village of climate refugees hidden deep in the Smoky Mountains and ending in an underground bunker in Portland’s Forest Park, Keeper is the fast-paced fourth installment in the Seed Savers series.

In Keeper, the government agency “GRIM” appears to be crumbling only to be replaced by FRND (the Food Resources & Nutrition Department), a corporate sponsored program with a more friendly public face. The Seed Savers Movement is on the verge of splintering as James Gardener’s fugitive status is viewed by some as a liability, while others don’t trust the mysterious JALIL. Trinia Nelson is bent on finding James and will stop at nothing. Earth Day parades turn into protests and someone is leaking classified government documents.

Meanwhile, Lily, Clare, and Dante, shut up in the bunker, become restless and begin sneaking out. In the park they run into Rose, an acquaintance from summer tutoring. Will their desire to rekindle the friendship lead to forgiveness, or will it end in betrayal?

Seed Savers-Keeper may be pre-ordered here.