of the Seed Savers Series
31 Comments 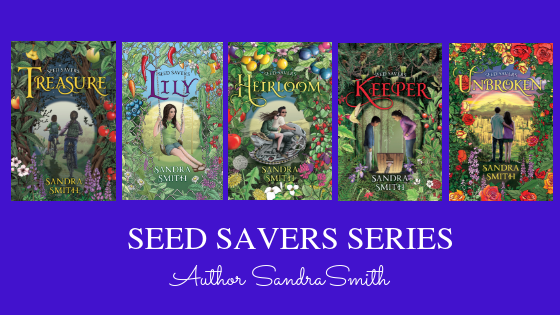 Welcome to the website of Sandra Smith, author of the award-winning middle grade/YA series, Seed Savers.

All books can be ordered directly from the author or publisher (Flying Books House) or use the retailer buttons below each book description. You may also order from your favorite local bookstore!

If ordering from Ms. Smith, contact her here with your order. Please indicate if you wish the books signed or inscribed. Thank you!

For bookstores, libraries, and schools, all books are available through Ingram and Perma-Bound Books.

IMAGINE A FUTURE WHERE GROWING FOOD IS A CRIME

Seed Savers takes place in a future where gardening and saving seeds is against the law and eating fresh produce is forgotten by a majority of the population. 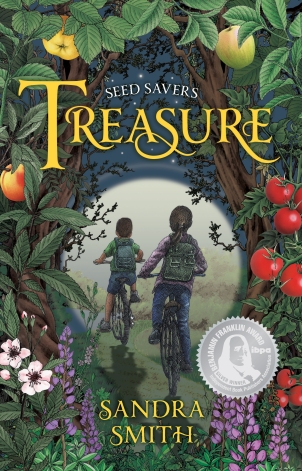 It’s 2077. There’s no apocalypse, but some things are different. Things like the weather, the internet, and food. In twelve-year-old Clare’s world, blueberry is just a flavor, and apples are found only in fairy tales.

One day, Clare meets an older woman named Ana who teaches her about seeds and real food. Ana tempts Clare with the notion that food exists other than the square, packaged food she has always known.

With Ana’s guidance, Clare and her friends learn about seeds and gardening despite suspicions that such actions are illegal.

When the authorities discover the children’s forbidden tomato plant and arrest their mother, Clare and her brother flee. Clare has heard of a place called “The Garden State,” and with their bikes, a little money, and backpacks, the children begin a lonely cross-country journey that tests them both physically and spiritually. Will they succeed in their quest to find a place of food freedom?  And can they, only children, help change the world?

Treasure is a gentle dystopian, frightening only is the possibility that we may not be far from the future it paints.

Treasure has a Lexile score of 660.

Locally available at LifeSource Natural Foods. Ask your local bookstore or library to order it! Listen to Treasure on Audible. 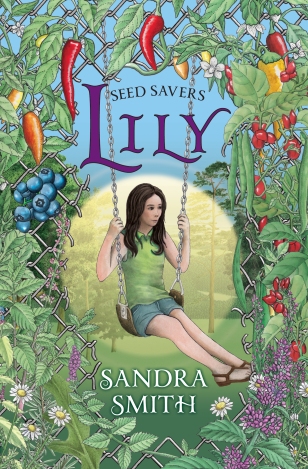 It’s definitely not what she had in mind for summer vacation.

When her friends disappear under mysterious circumstances, thirteen-year-old Lily sets out to discover more about the secret organization with which they were involved. Her investigation unearths a disturbing secret from her own past, unsettling her world even more. In the meantime, Lily makes a new friend and falls for a mysterious young man, even as she remains unsure about whom she should trust. As her world crashes around her, Lily struggles to decide what to do next.

Lily is volume two of the Seed Savers series but can easily be read out of order. It is is a suspenseful and reflective book with themes of self-empowerment, trust, acceptance of diversity, gardening, and politics. 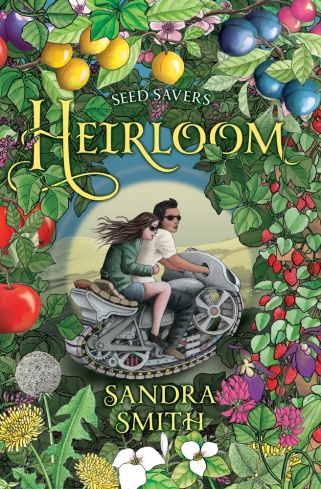 Jason might go all Edward Snowden on us. He’s ticked that the government put him in foster care and locked up his parents.

Arturo’s inconsistent English and penchant for mysteriously showing up might seem suspicious if he wasn’t so darn charming.

Lily gets braver by the minute.

It’s late in the twenty-first century and large corporations have merged with U.S. government agencies to control the nation’s food supply. Not only is gardening and seed ownership illegal, but fresh food is unheard of by the masses who are fed the processed food groups of Vitees, Proteins, Carbos, Snacks, and Sweeties.

Thirteen-year-old Clare and her brother Dante have escaped to Canada where the old ways still exist. It is there that they make friends with the roguish Jason and learn the political history of their own country’s decline of freedoms.

Meanwhile, Lily, the friend who was left behind, begins her own journey to find the father she never met—a former leader in the ill-fated Seed Savers rebellion of fifteen years earlier. From Florida to the Smoky Mountains, Lily follows the signs in search of her father and is helped along the way by the quirky characters she meets. Not to mention the attractive Arturo who shows up midway to “protect” her.

Heirloom seamlessly weaves the gentle agrarian story of Clare and Dante together with the swiftly-paced adventure of Lily and Arturo. Themes of family, empowerment, and politics meet in this futuristic tale nostalgic for the past. Heirloom is a hopeful dystopia in today’s current sea of post-apocalyptic literature. 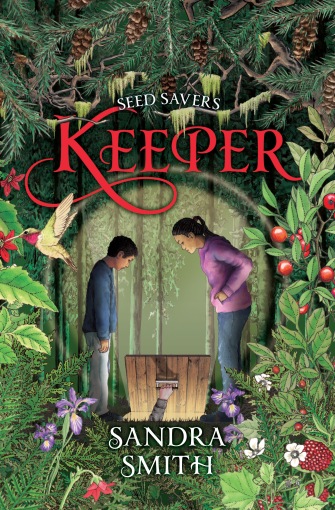 Beginning in a Pacific Islander village of climate refugees hidden deep in the Smoky Mountains and ending in an underground bunker in Portland’s Forest Park, Keeper is the fast-paced fourth installment in the Seed Savers series.

In Keeper, GRIM appears to be crumbling only to be replaced by FRND (the Food Resources & Nutrition Department), a corporate-sponsored program with a more friendly public face. The Seed Savers Movement is on the verge of splintering as James Gardener’s fugitive status is viewed by some as a liability, while others don’t trust the mysterious JALIL. Trinia Nelson is bent on finding James and will stop at nothing. Earth Day parades turn into protests and someone is leaking classified government documents.

Meanwhile, Lily, Clare, and Dante, shut up in the bunker, become restless and begin sneaking out. In the park they run into Rose, an acquaintance from summer tutoring. Will their desire to rekindle the friendship lead to forgiveness, or will it end in betrayal? 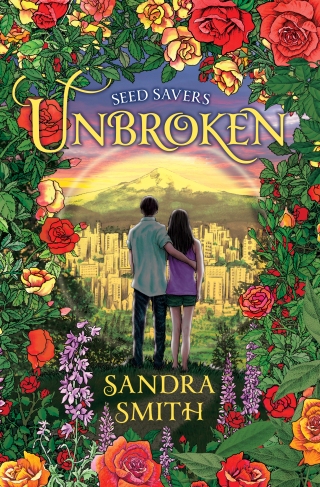 Although kidnapped by GRIM in an effort to strike back at her father–escaped former leader of the Seed Savers Movement–Lily quickly escapes with the help of sometime friend Rose. The girls camp out in Forest Park while plans are made for a safe rendezvous.

Meanwhile, Jason and Monroe join up with the questionable group Radicle, using their Monitor skills to hack into suppressed information in an effort to topple an overreaching government.

Nationwide, tension rises amid massive protests as Independence Day approaches. Will lost freedoms such as food rights and an open media be reclaimed? Don’t miss the explosive final installment of Seed Savers!

What Reviewers Are Saying About Seed Savers

“What a fun-to-read series that teaches the importance of growing our own food. It leaves young readers excited to read the next one!”

“Heirloom is the third installment in the Seed Savers series by author Sandra Smith. The concept of gardening being an illegal activity in this country is an interesting one, particularly in light of the growing use of processed and genetically modified foods in our diet. The concept becomes even more intriguing when a powerful company begins to systematically eliminate real food from the palates of American citizens.

The dual storylines are both intriguing in their own ways and alternate nicely throughout the book. Lily’s story is the more exciting of the two as it involves her being on the run, learning to listen to her gut, trust her friends and learn about herself. Clare’s story also parallels Lily’s in that she learns more about herself as she learns to grow food. They also start discovering boys in a refreshingly innocent way. Both girls work to find their place in the world and in the revolution that they have chosen to participate in. The book is engaging and keeps up a nice pace. The characters are well developed and will be endearing to readers. The book unveils secrets nicely and sets up more for the next installment in the series. While it would be helpful to read the first two books prior to this one, it’s not strictly necessary. Heirloom is a satisfying dystopian novel that younger fans of sci-fi will enjoy.”

What others are saying:

“A creative, engaging, well-written book series, that is filled with action, and a lot of truth as it touches the very real issue of preserving seeds from Greedy Corporate Seed Monopoly and understanding the importance of knowing how to grow our own healthy food. This book series is AWESOME!!!!!!!” — Rachel Parent, teen activist and founder of Kids Right to Know:

“An engaging read of another reality … this book is a stunning effort, and a great YA/children’s book.“ – (The Kindle Book Review)

“I found the basis for this book of the book extremely fascinating. A wonderful book centered on faith, friendship, and independence, it’s also a stern warning for people to wake up and pay attention to what’s going on today with our food. I think this is probably the most plausible premise for a dystopian novel I have read yet, (the parallels between Nipungyo and Monsanto are undeniable) and got so absorbed into the story that I read it all in one sitting. Heirloom is a fantastic book written for MG/YA (though I’m an adult and thoroughly enjoyed it!). It has a lot to teach kids about being strong, the importance of friendships, and standing up for what’s right. It even teaches you a little bit about gardening (how cool is that?). If you are looking for a gripping dystopian with a twist, look no further. Highly recommended!“ (Epic Book Quest.com)

“Seed Savers was really good . . .This was a good reading level for me. The story was involved and it read well. The plot was pretty unique. I like how the setting seemed to be some-what in the future. I also liked reading about the types of food they have (like “Sweeties”). I recommend this book to kids 9+.” (Erik, This Kid Reviews Books)

“It’s fast moving and interesting, with a zippy and action-filled plot.  There’s also a lot of good information presented in a clear and nonpreachy fashion.  It’s a great way to open up discussions with your kids, and you’ll come away learning something, too.” (Willamette Woman Magazine)

“Smith has given us solid middle grade tale featuring a new (and somewhat real) futuristic threat – illegal gardening.  It’s yet another great pre-cursor to students preparing to read Orwell’s 1984

.  Educators everywhere should be aware of this rising star in children’s literature.” (Anakalian Whims)

“Here’s a great piece of “juvenile” literature that doesn’t lose sight of one key fact: kids can think.“ (LitProf on Amazon)

“An older children’s story that is skillfully written in a way to show the symbolism of gardening, seeds, and a future that we can all learn from today.” ~ (UP Authors)

31 comments on “The Seed Savers Series”